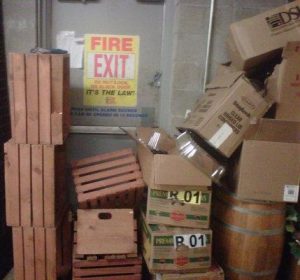 The U.S. Department of Labor’s Occupational Safety and Health Administration recently conducted an inspection of a Florida-based Macy’s location and issued 14 citations to both Macy’s and The Finish Line for numerous safety and health violations. The most recent inspection, conducted on Jan. 15, 2016, in Aventura, Florida, came as a result of a complaint, filed in relation to several workplace injuries. OSHA determined that the Macy’s and Finish Line workplaces were hazardous, due to violations involving obstructed exits and electrical wiring.

Macy’s Inc., a multi-national retailer based in Ohio, has undergone inspection by OSHA over 40 times and has repeatedly been cited for similar violations, involving obstructed exits, obstructed access to electrical disconnect panels, and the use of flexible cords instead of permanent wiring, at different locations. The Finish Line, an Indiana-based company, was located within the Macy’s store and shared the burden of a joint inspection.

The proposed penalty to Macy’s and The Finish Line totaled $103,220.

Many violations are easily identifiable and preventable. OSHA-approved general industry courses are a recommended measure of training for employers and employees.